Human Rights between the Sexes

A preliminary study on the life situations of inter* individuals

Intersex individuals are people who cannot be classified according to the medical norms of so-called male and female bodies with regard to their chromosomal, gonadal or anatomical sex. Inter* individuals are still pathologised and classified as “sick” or “abnormal”. As early as in infancy, by means of surgical interventions, they are frequently assigned to the male or female sex/gender in the Western world. However, there is no medical necessity to do so, since intersex individuals are, for the most part, absolutely healthy. Medical treatment mostly takes place without the consent of inter* individuals, especially when it is carried out in the early years of their lives. Frequently, they seriously suffer from the psychic and physical effects of medical interventions. They are, for the most part, denied the development of a gender identity of their own, which may be located between the socially dominant bipolar sex/gender model of male or female.

Inter* individuals encounter legal obstacles in many countries when registering their sex/gender for a critically important birth certificate, which needs to be acquired a few weeks after birth. In Germany, it is only with a birth certificate that, for example, parental pay can be applied for, health insurance coverage can be granted, separate fatherhood can be recognised and a childcare place can be reserved. The pressure on parents to have their child surgically assigned to an “unambiguous” sex at an early age is high.
Inter* individuals are socially barely visible worldwide, since intersex is still a strong taboo. For fear of stigmatisation and social exclusion, many inter* individuals do not come out. If it becomes known, in rare cases, they are not only exposed to verbal and structural discrimination, but also experience physical violence and life-threatening situations. In Uganda, for instance, intersex infants are severely jeopardised, since the mother risks being excluded from the community upon discovery of having given birth to an intersex infant. There is strong evidence that mothers kill their intersex babies in order not to be cast out.
With the present study on the state of discrimination of inter* individuals in 12 selected countries, the Heinrich Böll Foundation wishes to call attention to these violations of human rights against intersex individuals. Over the past years, awareness of human rights protection for individuals with a non-compliant sexual orientation and gender identity has increased significantly internationally and has, from time to time, led to actual improvement. Lesbians, gay men and, in part, trans* individuals have benefited from this development. Discrimination against inter* individuals has to this day mostly remained invisible.

Current human rights instruments and programmes directed towards lesbian, gay, bisexual, trans* and inter* (LGBTI) individuals aim to use the term “gender identity” inclusively. However, the actual conceptual realisation in, for example, concrete projects varies. For the most part, trans* and inter* individuals are only rhetorically included into the concept of sexual orientation and gender identity (SOGI) without their circumstances being substantially reflected upon or addressed. And if gender identity is defined conceptually, it is mainly trans* issues that can be found. The concerns as well as physical and gender diversity of inter* individuals are marginalised, if not invisible, even in the concept of gender identity – a conceptual void that is also mirrored in the absence of funding.

Our stated aim was – and is – that inter* individuals may describe their situations and their needs themselves. The challenges that we had to deal with when collecting the data presented here once more confirmed how hidden, risky and precarious inter* individuals are, in part, forced to live and how few come out as intersex. Therefore, we most sincerely thank Dr Dan Christian Ghattas for his persevering commitment when collecting the data and drafting the study. Moreover, we would particularly like to thank all inter* activists involved who shared their experiences with us and, as a result, render the study so valuable. We truly hope that international actors working on human rights, LGBTI rights, health, education and other issues will pick up on the findings. In collaboration with inter* individuals, they are intended to prompt an improvement in their situations. We consider the present publication a preliminary study. Its scope can be broadened by using concrete contextual analyses of individual countries. However, it can already assist with the exploration of practical projects at this point, without any further research being needed. 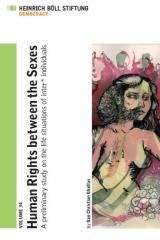 Human Rights between the Sexes