Giving women a voice in peace talks – the revolution is female

“There is no plan” to involve women in peace talks – no plan and also little interest, reports Madeleine Rees, Secretary General of the Women's International League for Peace and Freedom (WIPLF), speaking from her experience of different negotiation processes. The exclusion of women – even though they are key actors in wars and conflicts – has a historical structure.

At the annual expert talk of the Gunda Werner Institute in Berlin on 27 November 2014, experts from the current conflict-ridden regions of Syria and Iraq discussed solutions: How can women be involved in peace talks in the aim of helping shape people´s lives after war, but also to enable them to participate in agenda-setting when it comes to dealing with crimes such as sexual violence?

Introduction to the topic

Madeleine Rees’ report of what happened during peace negotiations in Syria clearly demonstrates the role of women: Lakhdar Brahimi, United Nations and Arab League Special Envoy to Syria, emphasised in his opening speech the importance of making the voices of Syrian women heard. However, by the time they were able to speak, he had already left. What needs to be done to change people’s mentality?

Rees provided some initial food for thought to explain why women are not being involved in peace talks. She argued that it is because in times of war, dominant narratives dictate clear gender roles. The same applies to the specific construction of masculinity: men as brave soldiers defending their wives, families and country with guns. A narrative of the caring father playing with his child at home would be difficult to reconcile with warfare. Women, however, are assigned the role of victim in war narratives. There is no place for weeping women in peace talks. But these narratives are one-sided and wrong. Women also fight – they keep families together and protect civil society. Different UN resolutions, such as resolution 1325, demand that women are involved in peace talks. They have, however, had little success so far, as seen in the current peace talks in Syria.

The current situation on the ground

The first panel provided an overview of the current situation in the region with a focus on the specific situation of women.

Mariah al Abdeh is the managing director of the organisation “Soriyat for Development”, which has three “Women-Now” centres in Syria that currently support a total of 3,000 women. According to Al Abdeh, the external impression of Syria as a progressive and secular country prior to the revolution is deceiving. There were actually high rates of domestic violence, discriminatory laws, and a high illiteracy rate. Women merely had a “decorative role” to play in politics. In contrast, during the revolution in 2011, men and women fought hand in hand. Women are the driving force in the besieged regions of Syria today. With many of their husbands arrested or killed, they often bear the sole responsibility for their families. Despite a lack of electricity and infrastructure, they provide food and protect children and the sick from enemy fire. Women´s work for civil society in times of conflict is extremely important. Despite the bombardments, women attend the training courses offered at the centres. It is here that they start to become engaged in politics. “We need peace,” they demand in demonstrations.

Iman Abou-Atta, head of the NGO “Social Change through Education in the Middle East”, works on human trafficking in the region. One third of the affected people are children, and two thirds women; they are largely trafficked for the purpose of sexual exploitation. Very often, their own family members are involved in trading them. Abou-Atta calls them “survivors” instead of “victims”, because they fought, survived and drew strength from it. Human trafficking for the purpose of sexual exploitation has existed in Iraq for a long time, and always goes unpunished.

Ala Ali, council member of the Al-Amal Association, raised the problem of the situation of women in the Iraqi region of Anbar.[1] Many very young women are illegally forced into marriage, in many cases to Al-Qaeda fighters. Their marriages are not registered, and thus they lack access to the rights that would be associated with a legal marriage. In addition, their “illegal” children are denied access to schools and the health system, making them easy targets for militia groups. According to Ala Ali, the IS occupation of the region has had a very different impact on men and women. While the occupation is largely accepted by men, women´s actions are severely restricted. Nevertheless, women have started networking with each other, for example through the “Iraqi Women Network”, which connects women of all ethnic groups.

All experts from the region harshly criticised the air raids, since they exacerbate the conflict and primarily affect women and children. They argued that emphasis needs to be placed on the needs of civil society instead. But to achieve this, their voices would first need to be heard. It is necessary to draw up a plan for the region and step up investments in education.

The second panel made a determined effort to find practical ways to involve women in peace processes.

Rajaa Altalli, head of the “Centre for Civil Society and Democracy in Syria”, emphasised that women in diaspora are an important resource who could help to connect women and pool skills. Mariam Jalabi, from the United Nations Liaison Office and the “Syrian Women Network”, contributed her experience of current peace processes in Syria. She pointed out that women are not physically present, since they are not being involved – not even by the UN. Rather than being addressed, gender topics are excluded in peace talks. Therefore, women´s participation in peace processes must be institutionalised, if it is not to be downgraded to a marginal issue. It needs to become the norm for women to play a leading role in decision-making processes since “the revolution is female”[2], says Jalabi.

The final panel discussion dealt with the question of why it is so difficult for women to participate in peace processes. In social discourse, politics is constructed as a dangerous and dirty business, which ensures that women are kept away from a political education. Decades of patriarchal dictatorships have resulted in a limited civil society. The lack of political culture makes it difficult for different groups to cooperate at a political level, but it is even more difficult for women to find their way in. Other factors include provisions that are hard to comply with for women, such as political mandates requiring travel within a country.

Finally, there is a specific role that is denied or not entrusted to women: that of decision makers. They are active in NGOs, have an influence, but are not allowed to make significant decisions at the higher levels.

The expert discussions reaffirmed that specific measures are needed to involve women in peace talks. Otherwise, women will be excluded and deprived of their access to rights and power in a state that is to be newly shaped. Many historical examples demonstrate this.

We need to overcome outdated narratives. Women are not merely “survivors”, but take on a variety of tasks. They protect civil society, provide humanitarian support, keep societies together and help to develop peace concepts across borders, but they also participate in armed struggles.

This, however, requires the participation of women to be institutionalised. All people involved – including men – need to be provided with a political education and expert know-how. Women need to participate directly in political decisions, and not only exercise influence over decision-makers. International actors need to be engaged in the region. We need to further develop strategies to achieve this goal as well as to find ways to address gender-policy issues in peace processes. 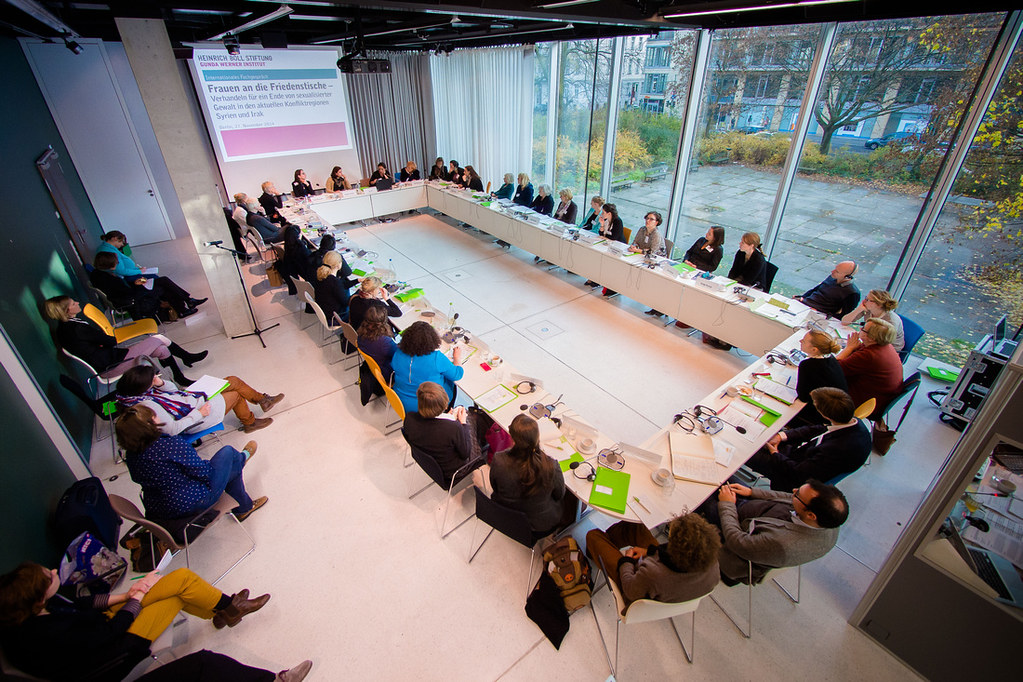 [1] Ala Ali's report on the situation of women in Al-Anbar Province can be downloaded as pdf below.

[2] In Arabic, “revolution” is a feminine noun.