Worldwide, violence against women (VAW) and feminicide, as its most dramatic expression, constitute a serious violation of human rights, which as well as being an unacceptable threat to women, is also a major public health problem. International conventions such as CEDAW [1], Belém do Pará and the Istanbul Convention recognize the impact of the media in the construction of public opinion. Appropriate news coverage regarding violence against women and feminicide, without discriminatory stereotypes and in tune with the advances of women's rights and gender equality, would contribute to changing mentalities and diminishing VAW.

Although progress in terms of journalism training, self-regulation, the creation of journalistic codes of ethics, and media monitoring can be recorded, much still needs to be done considering the emerging fundamentalist discourses, as well as the global backlash against women’s rights.

Dubravka Simonovic, the UN Special Rapporteur on Violence against Women (SR), its causes and consequences, opened the workshop by outlining the institutional and legal progress feminist movements have made in the last decades. Feminist ideas and demands became incorporated in legal documents such as the Istanbul Convention and the Belém do Pará Convention, and also influenced the CEDAW committee, which emphasized the role of the media in the process of eliminating discrimination against women. The SR stressed the importance of understanding how to use these possibilities in an efficient way. How can we send a message that human rights and women’s rights have to be respected by the media, without restricting it, and also encourage the media to take responsibility and implement codes of conduct? For this process to be successful, all relevant stakeholders, especially journalists, have to be involved. National human rights institutions have to work closely with journalists and media outlets and encourage them to develop guidelines and self-regulatory mechanisms, while simultaneously supporting feminist journalists.

How (not) to report on violence against women?

Main Questions: What are the steps to take for including a gender perspective in news coverage of VAW and feminicide cases? How could the media be used as a tool to help organizations and authorities to raise awareness and implement programs on VAW?

Mariana Carbajal, a journalist at Página/12, shared her experience about the dos and don’ts of reporting on violence against women. Considering that we are experiencing a period of emotions, not of information, it is important to question the form of the communication in the cases themselves, for example, whether certain details, like the victims name and occupation, should be published or not. This is particularly important in the cases of adolescent victims of sexualized violence, where media interest is extreme. However, media outlets often engage in victim-blaming by questioning why the victim was drinking alcohol, dressed in a certain way, or walking alone in the streets, thereby shifting the responsibility from the perpetrator to the victim. Another pattern that can be observed is a differentiation between victims due to their social class or ethnicity; if the victim is part of the middle-class, she is usually represented as the “good victim”, but if the victim is from a marginalized community she is represented as the 'bad victim'.

The role of the State should be to recognize that discrimination against women in the media exists and constitutes a problem. Although it is important to remember that the State should respect freedom of speech, the State can, and does, impose certain rules and regulations on the media, e.g. defamation; it can, of course, also give well-conceived recommendations. The proper management of information will contribute to the emergence of public opinion free of prejudice and stereotypes.

With respect to the question of how feminist activists can more effectively use the media in order to influence public discourse, Ms. Carbajal mentioned that journalists do not like to repeat topics. If there was a feminicide, it is interesting for media outlets the first time, but with every occurrence journalists lose interest. Hence, the best strategy is to creatively hide gender topics in other topics, thereby avoiding this problem.

Adriana Benjumea, Director of Corporación Humanas, shared her experience of training journalists on the issues of violence against women and feminicide. The three main problems she identifies is the general opposition of many politicians towards the idea of gender-sensitive education, the lack of time and funding for well-prepared and well-executed journalism, and the lack of knowledge on gender-related issues by many journalists. Hence, Corporación Humanas organizes capacity building sessions with many different journalists, with a focus on three main aims that directly tackle the problems stated above:

(1) to provide a gender-sensitive perspective with regard to the topics of political participation, the Colombian armed conflict and sexualized violence,

(2) to give advice about more adequate ways to cover and discuss these topics, and

(3) to provide credible and well-investigated sources.

Furthermore, she stressed that the journalistic profession does not only consist of stating what journalists perceive as facts, but also of pushing for a recognition of the State’s responsibility to prevent further attacks by implementing measures to prevent gender violence. Regarding the previously outlined inherent problems of time and funding, she said that feminist journalists have to find new ways of producing content about gender, even if it is not necessarily in the form of news.

During the discussion, Patsili Toledo intervened to state that in many countries the privacy of the victim and the safety of their relatives and friends are not respected because a lot of details are published. Natalia Gherardi noted that a relatively big problem is the slow and dry nature of the legal questions and events concerning women’s rights, which diminishes the interest of journalists and the general public. Both of these arguments are in line with Ms. Benjumea’s proposition to explore new forms of covering the issues, including columns and chronicals, and Mariana Carbajal’s recommendation to hide gender-related issues within other topics to maintain the public’s interest. Leila Linhares Barsted, a country expert at MESECVI, further proposed to work on media programmes exclusively produced by women in order to increase female representation in general.

Main Questions: How to enable cooperation between women’s organizations, authorities, the private sector and the media in practice? What should be expected with regard to the role of the State?

Natalia Gherardi reminded the audience that, although it might be very interesting and satisfying, it does not have any effect to always speak exclusively with people that are already feminists. She mentioned the need to open up feminist networks and debates with communities that are not (traditionally) feminist. This includes using an easy language that non-academics and non-feminists can understand. It is for this reason that the ELA [2] has been building alliances and coalitions with PR agencies, who are more often perpetuators of gender stereotypes than promoters of social change. Together, they lobbied journalists to ask certain gender-related questions to electoral candidates around the big themes of reproductive rights, political participation and domestic violence. Every campaign included four core questions, which were then posed to the candidates. This experience showed that PR agencies can be excellent allies and translate feminist questions and specialized language into the world of journalism.

Furthermore, she emphasized that the State does not only have an observatory function in this matter. The State has to be a relevant actor of change, especially if the issue is affecting the safety of its citizens.

This was immediately picked up by Luz Mejía, the technical secretary of MESECVI, who stressed that legal frameworks and obligations for States to limit discrimination through the media do in fact exist. Consequently, NGOs should start to hold the State responsible and push for commitment to the obligations of the existing conventions. Similarly, Tatiana Rein Venegas, also a country expert at MESECVI, argued for universities to be included in all forms of collaboration. Gender studies have to be integrated in all communication and journalism programmes, but also other curricula such as economics and law. This in turn was picked up by Natalia Gherardi, who mentioned ALAS, an Argentinean network of feminist law scholars, and argued for the promotion of these kinds of alliances across all disciplines and countries.

Next steps: opportunities for bi-regional cooperation

Luz Mejía argued for a focus on training projects and the exchange of best practices in this regard. She explained that, regarding information that was collected by MESECVI, not a single State in Latin America trains journalists on gender topics. Furthermore, she stressed the necessity and legal obligation of States to promote self-regulatory mechanisms.

Concerning the aforementioned problem of communicating feminist issues to a broader audience, she recommended the use of art performances to spread the necessary messages.

As a concrete proposal she stated that a global platform that displays and connects all relevant projects, NGOs, alliances, networks, and best practices concerning VAW and feminicide has to be created. 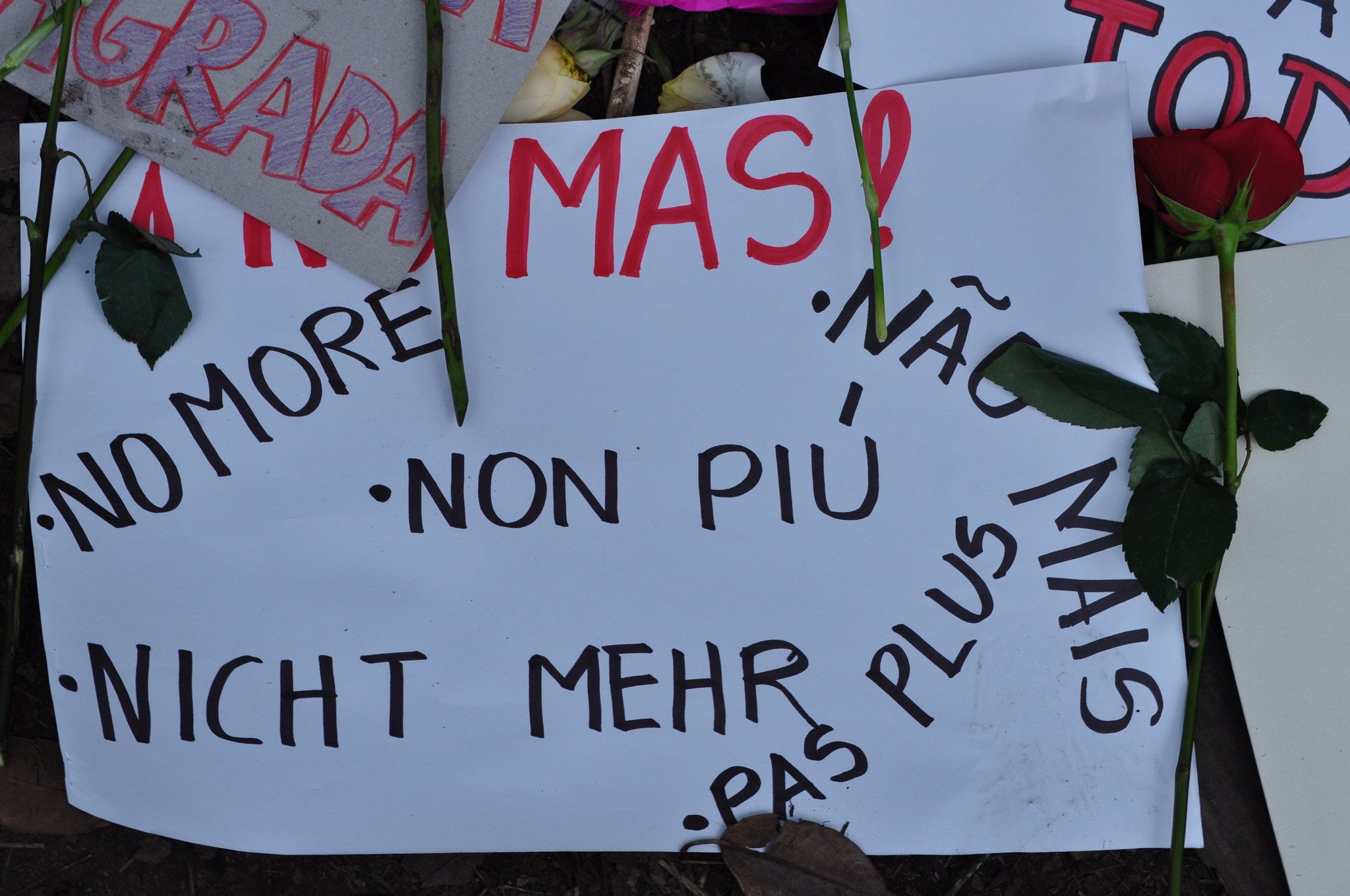 Violence against women destroys the present and the future

For more than 25 years, Mu Sochua has worked tirelessly for women's issues in Cambodia. In her time as Minister for Women's and Veterans Affairs, the first bill was on combating domestic violence. Aing Sokroeun Chim and Linna have talked to her about the meaning of Women's Day and the situation of women in Cambodia.
By Aing Sokroeun

Being the most extreme manifestation of violence against women, feminicide or femicide in Southamerican, as well as European Countries ist explored in this publication.

Violence Against Women in Serbia

Under the title „It Concerns All of Us“, the Heinrich Böll Foundation Belgrade published a series of articels on the issue of violence against women in Serbia.