Most regions in the world have been – to some extent – affected by climate change, and Southeast Asian countries are no exception. Within the group of people who are affected,  recognition needs to be accentuated on the disproportionate impact of climate change along gender lines. It is essential for the region to further enhance their collaborative climate actions to respond to the need of a gender transformational change that will increase women’s resiliency toward the risk of climate change.

It is safe to say that climate change is one of the most destructive environmental challenges human beings are currently facing. This idea is supported by factors such as the far reaching impact of the changing climate, the severity of its impacts, and the immeasurable cost needed to slow, if not stop, the havoc. Records of the global climate change impacts have also been disclosed by many, including the Intergovernmental Panel on Climate Change (IPCC), which has predicted potential adverse impacts of climate change on various aspects of livelihoods, including food and water security, human health, infrastructure, forests, marine resources, tourism and culture.[1][2]

Climate change and its disproportionate effects on gender

The gendered implication of climate change has been acknowledged by several studies and international communities, in which they argue that gender plays a role in shaping the experience of climate change within societal members. They further believe that gender roles may result in the divergence of responses and ways to adapt to climate change between women and men, as the consequences of distinct expectations and roles ascribed by society to each gender.[3][4]

In Southeast Asian countries, like in many other regions, different roles and expectations between genders are apparent. For instance, 56% of women in Southeast Asia participate in the labour force (with 67% of this in the informal sector) compared with 79% of men.[5] This figure may support the value of men as the breadwinner in a family while women are expected to perform as the secondary income earner.

Furthermore, different levels of expectations and participation across women at all levels of society within Southeast Asia is also palpable. For instance, in Lao PDR, women are contributors of 64% of agricultural workers, meanwhile in Vietnam and Cambodia, women stand at 39% and 34% respectively.[6] In this respect, the changing weather patterns and the increased frequency and intensity of climate-related disaster, such as drought and flood, will impact the lives of women and men, and across women, disproportionately.[7][8]

Indonesia, as the largest archipelagic state in the region, is not excluded from the risk of climate change, particularly its smaller and more vulnerable islands.[9] Indonesian women are expected to play a role in the domestic, reproductive, economic and community spheres – with 42% of women who have entered a formal or informal economically-productive role. Only 1% of men assist women in reproductive roles, which make women become more burdened by work than their male counterparts.[10]

In relation to Indonesian rural society, women are typically expected to play the role of collecting water for cooking, washing and drinking, while at the same time taking care of children. This seemingly imbalanced distribution of work between women and men will contribute to the increased burden of women during the event of climate change and its aftereffects, such as water scarcity and drought, that will extend women’s time and burden associated with walking and collecting water. This also often implies women are forced to leave behind other activities, including paid work, education or leisure.[11]

Despite the undeniable differences of socio-cultural and gender elements in each Southeast Asian country, their similarities should not be left unnoticed. It is evident that numerous women in Southeast Asia are in the underprivileged situation in terms of environmental access and benefits in comparison to men. This includes women’s unequal access to natural resources and environmental decision-making processes.[11]

In recognition of the significant role of gender in shaping the experience of societal members towards climate calamity in Southeast Asia, it is therefore pivotal for the region to further enhance their collaborative climate actions to respond to the need of a gender transformational change that will increase women’s resiliency toward the risk of climate change.

It’s also critical for the region to advance its processes and initiatives that will enable transformative changes in the area of climate change adaptation and gender that are cross-sectoral, multi-dimensional and strive for a holistic approach.[12] This may include consideration of developing a regional-level critical analysis of gender and how it designs people’s experiences of climate change in order to open transformative adaptation advocates for marginalized groups in dealing with climate change impacts.

In acknowledging the vulnerability of Southeast Asian countries to climate change, and the disproportionate impacts the calamity poses to its society along gender lines, enhancing regional collaborative actions in gender and climate change is imperative. It is even more crucial in the present-day situation where countries are planning and preparing to rebuild economies and prosperity in the aftermath of COVID-19, which has also impacted women and men differently.[13]

Thus, an in-depth and rigorous gender analysis of climate change impact to Southeast Asian communities is essential to enable the design of comprehensive adaptation measures that will facilitate gender-transformative actions and bridge between combatting climate change, upholding critical commitment for gender equality and recovering from the COVID-19 pandemic. Otherwise, adaptation measures that neglect to look after the gendered impact of climate change to communities are likely to amplify social inequalities, leading to further maladaptation and increasing people’s vulnerability toward change.[14]

This article is strictly the personal opinion of the author and does not represent the official positions of his employer.

The views expressed by the author are not necessarily those of Heinrich Böll Stiftung.

[5] SDG Statistical Annex (2020).  <https://unstats.un.org/sdgs/files/report/2020/secretary-general-sdg-report-2020--Statistical-Annex.pdf> (Estimates refer to the SDG region of South East Asia, which may include Timor Leste in some cases.)

[13] UN Women, Unlocking the lockdown: The gendered effects of COVID-19 on achieving the SDGS in Asia and the Pacific, 2020,  <https://data.unwomen.org/sites/default/files/documents/COVID19/Unlocking_the_lockdown_UNWomen_2020.pdf>

Recognizing the significance of inequitable gender relations for women’s vulnerability to climate change, this study analyzes if and how an adaptation measure involving a relocation program that gives titles to new public housing to women implemented in response to severe flooding in the Mexican state of Tabasco in 2007, has contributed to modifying  gender relations and strengthening gender equality.
By Jenny Jungehülsing 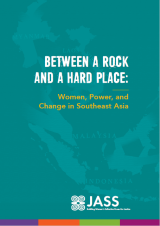 Climate change: the empowerment of women seen as an added value

Rural women increasingly come to be seen as vital agents in response to climate change. Disproportionately affected by it's impacts, these women also have a critical role in combating the weather changes, analyses Camila Moreno.
By Camila Moreno