A feminist foreign policy is associated with being ethical, principled and visionary, yet a government’s actions based on Western standards and values can easily come across as moral superiority or even racism when it comes to other countries.

In a 2015 speech at the United States Institute of Peace, the Swedish foreign minister Margot Wallström claimed that a feminist foreign policy seeks the same goals as ‘any visionary foreign policy: peace, justice, human rights and human development’ (Wallström, 2015). At a panel discussion following Wallström’s speech, the former deputy administrator of the U.S. Agency for International Development, Donald Steinberg, said that he has found that men’s eyes “glazed over” when he cited human rights or morality as reasons for preserving women’s rights amid international conflicts (Rupert, 2015). According to Steinberg (in: Rupert, 2015):

To me, the real arguments are that societies that protect women, that involve women in these processes, that focus on girls’ education, are more stable,” he said. “These are countries that do not traffic in drugs and people and weapons. They don’t send refugees across borders or across oceans. They don’t harbour terrorists or pirates. They don’t transmit pandemic diseases. And, perhaps most importantly in this town, they don’t require American military force or troops on the ground.

These accounts tell a story of the gendering of ethics, and of foreign policy – where ‘feminist’ (or ‘feminine’) foreign policy is constructed as ethical, principled, or visionary, in contrast with ‘masculine’ foreign policy which is understood as ‘realist’ and focused on national interests and security. Clearly, Steinberg saw the need to masculinise feminist foreign policy by pointing out what he perceives as the real arguments -- to make it more ‘palatable’ to men whose eyes ‘glaze over’ at the mention of women’s rights.  But either way, the message remains the same: ‘good’ societies ‘protect’ their women, and those that don’t should be disciplined – either through realpolitik or, through ethics.

What is revealed when we unpack the discursive and normative positioning of feminist foreign policy as ‘ethical’?  What is at stake when the principles in principled feminist foreign policy are understood as a set of fixed, absolute moral rules based on Western liberal notions of human rights or justice?  I argue that according to this narrative, global justice (or ethical feminist foreign policy) is enacted by a series of powerful, Western states to save (or punish) racialised others. Not only is this narrative partial and inadequate, but it serves both to produce and reinforce existing racialised, colonial hierarchies and power relations.

When the requirements of an ‘ethical, feminist’ government are understood in this way, Sweden must pass judgement on the unethical or ‘barbaric’ acts of other states. They must condemn, criticize or rebuke any policy or regime that appears to contradict their own commitment to justice and human rights. This emerged clearly in the 2015 ‘Saudi affair’. On February 11th, Wallström, addressing the Swedish parliament, criticised Saudi Arabia’s human rights record; specifically, she criticised the public flogging of the blogger Raif Badawi, later describing it as “medieval.”  She also referred to Saudi Arabia as a ‘dictatorship’ and commented on the state of women's rights in the country.

Wallström had been asked to deliver a speech at an Arab League summit in Cairo in late March, but Saudi Arabia intervened, and Wallström was disinvited. On 9th March, Saudi Arabia withdrew its ambassador to Sweden, stating that Wallström had “unacceptably interfered” in the country’s internal affairs (Nordberg, 2015). Wallström told reporters in Cairo that Riyadh had blocked her speech because she was due to “celebrate women’s achievements” and focus on women’s rights and representation (Crouch, 2015). The day after Wallström was supposed to have appeared in Cairo, on March 10th, the Swedish government announced its decision to not renew a bilateral arms agreement with Saudi Arabia.

Unsurprisingly, this move has been lauded and hailed as Wallström’s “feminist foreign policy” in practice. While some might applaud Sweden for taking an ethical stand on this issue, the affair invoked ethics in a way that disregarded the wider socio-economic context and made moral judgements in the absence of a clear historical and contemporary context of the two states. As a result, it demonstrated that a hubris of moral certainty reproduces colonial logics that is, I suggest, counter-productive to long-term feminist goals. To assert the backwardness and morally-bankrupt nature of Saudi Arabia is to position Sweden as a superior, enlightened culture which treats its women ‘properly’. In addition, this kind of framing contributes to the erasure of Saudi women’s agency. As Heath (2016) argues, it is crucial for Sweden to understand the complicated and nuanced situation of women within the kingdom of Saudi Arabia and recognize the indigenous women’s rights movements and the ‘renegotiations’ of gendered power relations that currently exist. Indeed, Heath points out that women’s rights movements in Saudi Arabia are framed by several contextual factors, including  Islamic religious texts, Saudi national identity, the Saudi state and the importance of promoting an ‘indigenous’ (not Western) movement (ibid).

Blindness to this context, and to the agency and diversity of women within Saudi Arabia, reveals both racist logics and a tendency toward culture-blaming that de-politicises social problems, and diverts attention away from the ways in which gendered practices are supported and sustained by wider global economic and geo-political structures of inequality. To imagine culture as an isolated realm of values and practices that are separate from other kinds of social relations, is inevitably to reproduce the dichotomies of ‘us’ and ‘them’. This line of thought is blind to both historical and current relations, and ultimately will hinder our ability to create a foreign policy that helps to create the conditions for long-term transformations in gender relations. Ethical stances which pit ‘barbaric’ cultures against enlightened Western morality are thick with neo-colonial logics and racial hierarchies that perpetuate, rather than transform, global inequalities. As Alison Jaggar argues, topics on the agenda of ‘intercultural dialogue’ about global justice for women (and men) in ‘non-Western countries’ must include questions about the basic structure of the global political economy, as well as the economic policies of Western governments that directly and indirectly affect poor women’s lives (Jaggar, 2004).

My argument here should not be misunderstood as a defence of the Saudi regime. Wallström’s mistake was not the withdrawal from the arms agreement. Rather, it is a critique of the framing of this move within a wider critique of the ‘medieval’ and ‘barbaric’ practices of non-Western, non-liberal societies, and its attachment to a general appeal to ethics and justice.  In so doing, her action, while progressive, is unlikely to be transformative in the direction of long-term feminist goals. For Sweden, a more transformative approach would have been to use the arms trade agreement to highlight the relationships linking the global arms trade, transnational business interests, the permissive conditions for continuing warfare, and the structural causes of women’s oppression across the globe.

Foreign policy can never truly be feminist as long as it is grounded in an understanding of global justice that reproduces, rather than challenges, dominant gender and racial hierarchies.  A feminist and post-colonial foreign policy would actively disrupt the binaries – ‘civilized-barbaric’; ‘saviour-victim’; ‘masculine-feminine’ – on which traditional notions of international ethics are based. From a post-colonial feminist perspective, responding morally to global challenges requires a deep reflexivity on the part of powerful states regarding their own historical and contemporary roles in the situations they condemn.

This article was originally published in Disrupted The Poscolonial Issue (July 2018), which is published by the Centre For Feminist Foreign Policy. 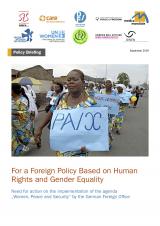 For a Foreign Policy Based on Human Rights and Gender Equality

Need for action on the implementation of the agenda „Women, Peace and Security“ by the German Foreign Office.