Crossroads and burning houses – why feminism cannot be colour-blind

For years, Black Lives Matter has called attention to the horrific reality of police violence threatening the lives of Black people all over the world. In 2015, Kimberlé Crenshaw started the campaign Say her name pointing out the silence and lack of representation around Black women’s deaths within and beyond the Black Lives Matter movement. Although women founded the movement and fight at the forefront, Black male victims remain the central focus. Meanwhile, cases like Breonna Taylor’s death, which is still unleashing protests in Louisville as the officers involved have not faced any charges, remain an afterthought.

The specific vulnerability faced by Black women cannot be grasped by traditional white feminism. Intersectionality seeks to debunk the universalisation of the female experience of gender overlooking the unique dangers facing intertwined identities. This is exemplified in the Black female experience of the domestic and the public – a central distinction of traditional specifically second wave feminism which made important strides towards recognising the personal as political[1] but is lacking in many respects. It is vital to take into account white female complicity and deconstruct the idea of a homogenised patriarchy and a universal masculinity which obscures both the racialised dynamics of women’s oppression and the gendered dimension within the oppression of Black people.

In her crossroad analysis, Crenshaw points out how when an accident occurs on the crossing of two roads – one representing gender, the other representing racism – someone placed at the intersection of these identities can be hit from both sides. It is not just their female self or Black self that gets hurt, rather the entire body as a whole. Having separate ambulances for each road and having the victim explain which road caused the incident puts her in a place of invisibility. White feminism can be seen as an ambulance that only operates on one of these roads. Intersectionality is meant to disrupt the rigid analysis of separate forms of inequality. It is vital to see intersectionality not as the simple act of adding categories like race into the equation. It is rather about grasping “intersecting systems of power” that overlap and mutually construct each other[2].

Intersectionality had long been articulated before being conceptualised by academics - already in 1851, Sojourner Truth famously asked “Ain’t I a woman?” highlighting that women of colour have to separate their layers of identity or even hierarchise them. Prominent suffragette Susan B. Anthony of the first wave of feminism said, “I will cut off this right arm of mine before I will ever work or demand the ballot for the negro and not the woman”[3]. Sentiments like these laid ground to the distinction of women and Black people, ultimately recognising Black women as neither Black nor female, which is still being challenged by intersectional feminists.

In order to allow for this project of centring the holistic intersectional experiences of Black women, in particular, it is necessary to develop a more refined understanding of power. Lorde stresses, “the future of our earth may depend upon the ability of all women to identify and develop new definitions of power and new patterns of relating across difference”[4]. Intersectionality challenges understandings of power within white feminism by conceptualising power as fluid and relational, and by recognising power as privileged positionality within the production of knowledge and voicing of demands within feminist discourses. It reveals “the patriarchy” not as a homogenous entity but laced with power imbalance. Intersectional feminists aim at the decentring of the normative subject of feminism and pointing out that the universalised experience actually represents a privileged positionality of white, cis-gendered, able-bodied, middle-class, heterosexual women[5].

Colour lines in the private and public

Breonna Taylor’s death illustrates a vital dynamic in the lives of Black women. She was killed when police who had a “no knock” warrant raided her home to investigate a drug related suspicion that turned out to be unfounded. They entered her domestic space, a private sphere without warning. The home has a central function in feminist theory. Second wave feminists also interrogate the artificial separation between public and private spheres – particularly insofar as labour is concerned. An intersectional lens, however, shows that the male public domain and the female private domain are not always as rigidly dichotomised along gendered lines only. Apart from the heteronormativity of this assumption, Brewer stresses, the concept of gendered roles within the nuclear family stems from “upper-class, white patriarchal prerogatives that are unevenly shared across race and class lines”[6]. Black working-class women, who have often worked as maids and cleaners, historically and today, are placed in the position of caring for a domestic sphere that is not their own and to them presents the outside world – this is particularly visible in care sectors vital in the Covid-19 pandemic. Lewis specifically points out that throughout her working-class upbringing, her Black father who experienced racism “outside” inhabited the private sphere while her white mother interacted with the public sphere[7]. As Breonna Taylor’s case makes painfully clear, Black women’s experience of the domestic vs. public domain is shaped by a division that runs along a colour line in addition to gender lines. Her home would have ideally served as a protection from the racist outside world. Her husband shooting a police officer in the leg in self-defence can be seen as an attempt to protect the home from racism rather than from the patriarchal threat.

While men are generally complicit in perpetuating sexism against Black women, there is also a particular bond between Black women and men that goes beyond “the patriarchy” as a monolithic category. Lorde stresses: “Out of that shared oppression we have developed joint defences and joint vulnerabilities to each other that are not duplicated in the white community”[8]. The Black home is not just a place of female subordination but also a “a safe haven from the indignities of life in a racist society”[9]. hooks points to the historical continuities of this: “African American people believed that the construction of a homeplace, however fragile and tenuous (the slave hut, the wooden shack), had a radical political dimension. Despite the brutal reality of racial apartheid, of domination, one’s homeplace was the one site where one could freely confront the issue of humanization, where one could resist”[10].

This shared bond against a hostile outside world makes interventions more complex, as it is, to some extent, a forced union. It obscures Black women’s vulnerability to male domination. Intracommunity issues like domestic violence against women of colour are being suppressed in part due to efforts to unite the community or keep it from being portrayed as “pathologically violent” – leaving Black women all the more vulnerable[11]. Because of this ambivalence, Black women often have to choose between struggles.

Mohanty argues that the portrayal of a universal white female experience of gender is grounded in the “familial closeness of white heterosexual women to white men”[12]. The idea of “the patriarchy” needs to be interrogated in regard to white women’s complicity in perpetuating inequalities.

In times of genocide, women are often characterised as “eternal victims and left-behind widows, incapable of taking part in such hateful activity”[13]. Despite evident victimisation of women, examples like German national socialism problematise the often-overlooked agency of (white) women as bystanders, perpetrators, and beneficiaries of the racial oppression of fellow women[14]. While Bock argued that all women under Nazi rule were victims, Koonz countered saying that “Aryan” mothers were in privileged positions despite being “relegated to a private sphere of domesticity by the sexist policies of the Third Reich”[15].

Butler’s conception of gender as dynamically created in interaction draws attention to the role which women play in creating gender themselves. White women’s own subordinated position in the domestic sphere also gave them a pass for their complicity in racial inequalities. Lorde stresses, “White women face the pitfall of being seduced into joining the oppressor under the pretence of sharing power”[16].

In May, a video caused outrage when Christian Cooper filmed how a white woman threatened to call the police on him saying “I’m gonna tell them there’s an African American man threatening my life”[17]. The video illustrates that the symbolism of a threatening Black man juxtaposed with an innocent white woman places the Black man under immediate suspicion. To Cooper, the public sphere is also a place of systematic danger, not merely patriarchal superiority. Ignoring the nuances within the male category erases the role that race but also other identities play. Constructivist approaches like that of Connell show potential in differentiating between forms of masculinities that are closer or further away from a hegemonic male ideal.

A definition of “the patriarchy” as “a system of interrelated structures through which men exploit women”[18] is misleading in its dichotomic vision. Just like the anthology of the same title says that “All the Women Are White, All the Blacks Are Men, But Some of Us Are Brave”[19], all of the racist perpetrators are male, and all of the Black victims are male, leaving out white female complicity as well as Black female victimhood.

White women are unable to fight racism without acknowledging their own complicity. Feminist universality does not function in saving the lives of Black women from racial or gendered violence – differences within womanhood need to be acknowledged and tackled.

Ultimately, intersectional feminists challenge white feminism as they do not wish to be integrated into a racist but non-patriarchal society. They force white feminists to ask themselves, in the words of James Baldwin, “Do I really want to be integrated into a burning house?”[20]. The fight against racism must not be aimed at awarding Black men the same privileged position in relation to Black women just as the fight against sexism cannot be aimed at giving Black women the same racially subordinated position as their Black male counterparts. Without a grasp of the intersecting nature of power, feminism is incapable of genuinely achieving liberation that goes beyond mere inclusion into a rigged system of oppressions.

Glossary of terms and font usage for the words "Black" and "white" in this context can be found here.
Tags
Black Lives Matter
Kimberlé Crenshaw
feminisms
Intersectionality
This post is licensed under:
CC-BY-NC-ND 4.0 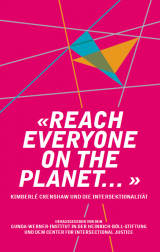 “Brazil is a racial democracy! We don’t discriminate against anyone,” say some; “That’s a myth!” reply others, pointing to statistics that show all too clearly the correlation between ethnicity and hierarchy. According to opinion poll evidence, Brazil is a racist country whose citizens all consider themselves to be nonracist.

Where are the Black female professors in Europe?

There is also a lack of BPoC at the academic level, who can teach and represent intersectionality and science critically.
By Prof. Dr. Iyiola Solanke

The Campaign #SayHerName was installed in late May to raise awareness for Black Women, who suffer from police violence, including harassement, beatings an killings.