Teaser Image Caption
The Project "The City is For All" held held an activist women's day for homless women, the second after 2013

Caroline Ausserer: What is your criticism of the last years of gender equality policies of the EU and what are the future challenges?

Mariann Dosa: I am not exactly an expert on EU gender policies, though I do follow them. I am much more involved in Hungarian policy making in the area of gender, but especially on poverty and economic forms of discrimination and exclusion. I am concerned with problems of women facing intersections of discrimination or marginalization or exclusion, which I also brought up in the panel discussion of the conference I participated in.

You mean the conference of the Gunda-Werner-Institute “Europe – a gender equality project”.

Where should this equal representation be established, eg. in the policy legal texts?

M.D.: In all possible forms of policy making and discussions, there should be a much higher representation of women, but especially poor women, homeless women or women with experience of prostitution. I know it needs a lot of resources, all kind of resources: expertise, sensitivity...maybe EU politicians need to be trained how to do that. It needs outreach work to gain access to people in those social strata, but it is not only worth it but also essential to have a progressive and more democratic EU that can tackle the most important social problems.

How is the situation of representation right now?

If we look towards the elections, what would be your assessment of the outcome? And how would this change what you were saying?

M.D.: I do not think this would change. If you look at the recent Hungarian parliamentary elections, the results are very similar to the last ones: the government has 2/3 in the Parliament right now as well as the last 4 years, so they had the majority and could take decisions on their own. The election rules made this possible, because the electoral system is not proportional. That is, even if they have less than 50% of votes, they can have 2/3 of mandates in the Parliament.

The governing Fidesz Party reached 44,5 % of votes at this election, but they still get 2/3 of seats in the Parliament.

M.D.: This because it is very biased election system – a disadvantageous combination of majoritarian and proportional systems, and the current government has made it even more skewed by all sorts of means. And the far right, Jobbik, has gained even more votes than last time, which is really upsetting and alarming knowing their anti-democratic exclusionary politics. I do not think that the European elections would have a different outcome. Because it is usually not about the EU, people do not get appropriate information about it and EU institutions are remote for them, therefore EU elections are often just a mirror of national politics - in the case of Hungary for sure.

What kind of impact would this have for gender equality policies in the EU?

M.D.: In terms of gender policies, Fidesz is already very conservative...I am not so concerned about the far right in terms of gender, but in terms of their fascism, their anti-Roma prejudices, their antisemitism, their homophobia – they do not have progressive gender policies either, but I am more worried about these other issues. Overall you do not need to go as far as Jobbik, if you look at Fidesz: currently the representation of women in the Parliament is about 9 %, which is one of the lowest in the EU.

What are the most urgent needs of the EU in regard to a more equal, democratic and progressive Union?

M.D.: It would be necessary to give more resources for the inclusion of dismissed groups, be it poor women, women facing homelessness etc. Include them in the campaign work for the election, there the marginalized classes could immediately be involved. I propose also trainings for these groups, but also for EU policy makers - to raise their awareness on the problems and situation of these people.

Do you currently work with some projects that would bring this forward?

M.D.: I am member of a community organization called “The City is For All” in Budapest, which organizes homeless people themselves, some of the members are middle-class activists, but the majority has experienced homelessness. In the past four years it had an impact on Hungarian policy making regarding housing and homelessness. That is a good example of inclusion of people on the highest level. So for example we have participated in parliamentary committee meetings, in demonstrations, in policy making, e.g. drafting policy papers and presenting them in front of policy makers. That seems an efficient way of making policies. Unfortunately the current government is very hostile to homeless people, so it is difficult, but I can see positive results of our work on many levels.

Could you please give us some more examples of the impact of this project?

M.D.: It is first of all a visibility issue: homelessness was not even present on the policy agenda before our pressure work. We had a great media attention due to the innovation of the project. Some of our projects started to work on the local government level, they are starting to be implemented in a more systematic way. We are using for example empty social housing in Budapest, we are renovating them with NGOs and then they are can be used by formerly homeless people – and homeless people are active participants of the entire process. This could be a state policy and we have achieved steps towards this.

How are the homeless policies of the current government?

M.D.: The current government has put into the constitution that homeless people can be fined, persecuted by the police and even imprisoned for residing on the street, which is unprecedented in the whole world.

Thank you for the interview!

LINK to the Project: The City is for all 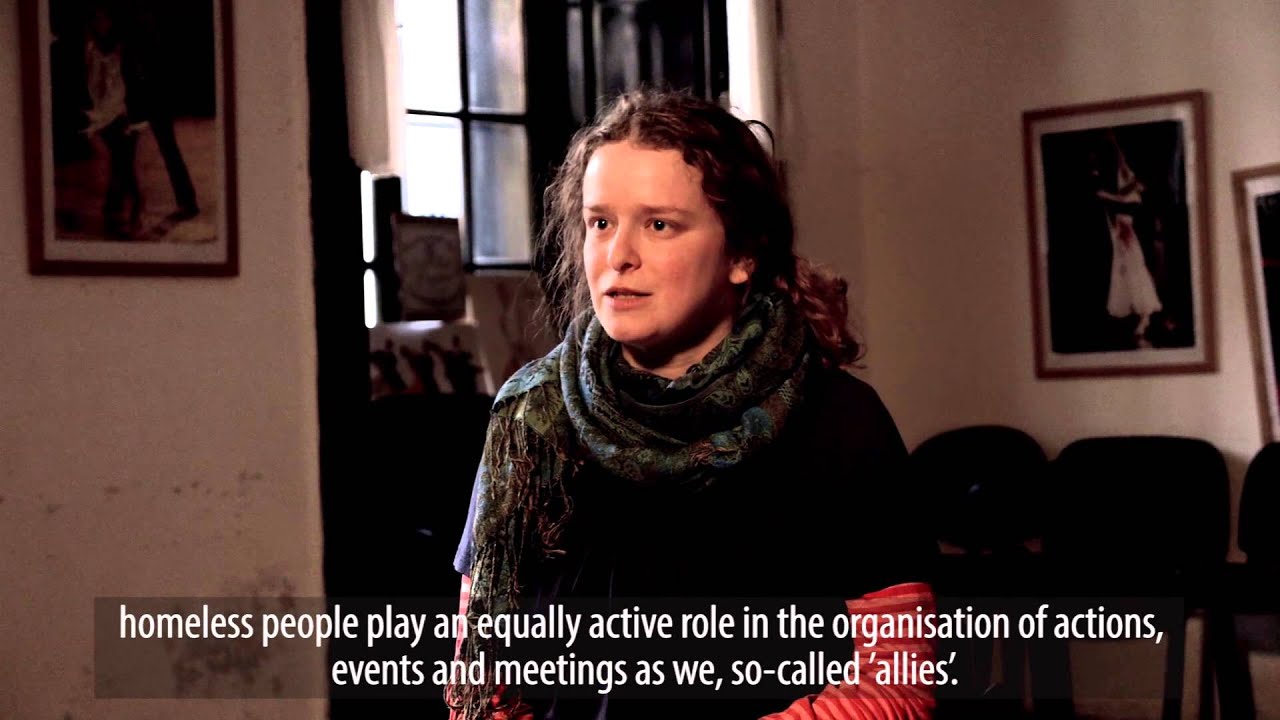 Gábor Hajas and Tessza Udvarhelyi are activists of the group "The City Is For All", a volunteer based grassroots organization operating in Budapest, in which homeless (currently or past) and non-homeless activists work together for housing rights and social justice.