“2015 must never be allowed to happen again”: that is the mantra

This short sentence is all you need to understand why the German government committed an error of judgment concerning Afghanistan. An error of judgment that kills people every day – and democracy throughout the world as well, by the way.

Climate disaster in foreign policy. On 16 August, Foreign Minister Heiko Maas appeared before the press and made his confession: the federal government, the news services and the foreign office for which he is responsible had all misread the situation. They did not think that the Taliban would take Kabul so quickly. “There is no glossing over this”, he summarised.

But experts within Afghanistan and outside it have long been forewarning of this triumphal procession of Taliban. Certainly, by the time of the announced withdrawal of US troops, NGOs and other employers in Germany had been made aware by their partners on the ground that even the most experienced of them were under no illusions that they would be able to continue their work. They were afraid for their lives. It was against this backdrop that the Greens called upon the Bundestag at the end of June for so-called local employees, working now or previously for German authorities and organisations, to be allowed to come to Germany. The German government refused, on the grounds that 2015 must never be allowed to happen again. That is the political refrain that informs the thoughts and actions of politicians senior enough to make these decisions. That overrides all the intelligence authorities and ministers have been given. And that kills people.

That was the year when federal government ignored expert warnings of a famine in Lebanon affecting Syrian nationals stranded there, with hundreds of thousands of them predicted to risk the dangers of crossing the Mediterranean and then continue to Germany on foot. Those Syrian people were just as desperate as their Afghan counterparts are now, clinging onto aircrafts and falling to their deaths. Again, the decision-makers allowed themselves to be talked round. They did not count on there being either significant numbers of survivors, or sections of German civil society prepared to offer them such a warm welcome. When the extent of their miscalculations became clear, they were forced to act “quickly” and Angela Merkel decided not to close the borders. Her reasoning was that there was no danger to be expected from the refugees and that a wealthy country such as Germany has a certain responsibility. Wir schaffen das, she said. We’ve got this.

Already in 2015, it wasn’t entirely clear who Merkel meant by “we”. Everyone who rolled up their sleeves and set to work supplying the new arrivals with essentials came up against systematic efforts by the authorities to obstruct them. In Berlin, survivors were forced to queue up for weeks in intense heat outside the building of the state health authority (Lageso). They were given neither queue numbers nor water. It was not until children started passing out and furious local residents started organising food and drink for them that the authority slowly started taking care of the queueing people. The so-called refugee crisis was actually a crisis of dysfunctional authorities. There was no “we” with a capital “W”.

The stories that must be told

Like many others, I was also at the Lageso for days on end back then, was never off the phone to the health authority and queued for hours to get appointments for survivors from Syria. Among others I helped was a small family, the father of which had been wounded by a head shot from a sniper’s rifle in Homs and whose injury has left him seriously disabled. It is only because a group of Berliners met by chance and made a stoical decision not to abandon that family that they were able to claim their rightful refugee status. Last week, the oldest daughter of the family, Emissa, stood proudly outside her new school with her enormous new satchel. She now speaks German, Arabic and English fluently; education is taken very seriously in that family. Meanwhile, both parents now work for major international aid organisations. They avoid authorities if they can, having had further painful dealings with them.

Stories like this are not uncommon and they are what happened in 2015: contrary to the expectations of most of the federal government and many people in positions of power in various authorities, civil society rushed to the aid of people in need and politics was made from the bottom up. This was particularly beneficial to people who came from Syria. The Ministry of the Interior ruled at the time that Afghanistan was a safe country and that refugees from there were therefore not entitled to remain in Germany. Three years later, Horst Seehofer boasted that he had sent back 69 Afghans on his 69th birthday. He was not asked to resign. Once again, everyday barbarism had the upper hand in Germany and still reigns supreme.

But not alone. Once again, the assumption that everything would be fine has not worked out. Once again, there are images of the unimaginable suffering of people, this time in Afghanistan. Certain journalists are asking uncomfortable questions and a wave of empathy has been pouring out through social media for days. The artist Philipp Ruch of the “Centre for Political Beauty”, who has funded a safe house in Kabul on his own initiative, calls it a “detonation of sympathy”.

Many NGOs are now working round the clock trying to get at least their own partners out of the country. It is not clear how. The Foreign Minister has agreed to more evacuation flights. But how will the allies get through the Taliban checkpoints to the airport? Some of them, hopefully many thousands, will make it to Germany despite the historic refusal of the federal government. Then and only then will the phrase “2015 must never be allowed to happen again” ring true.

For then, the authorities in cities and states will be given once more the opportunity to defend human rights at home, in other words to implement them, and may this time treat the incomers with dignity. And may also finally treat the 30,000 or so Afghan nationals already living in Germany with respect. Additionally, many journalists will then get a second chance, for nobody is forced to put pen to paper to destroy solidarity with people arriving in Germany, just to earn plaudits from right-wingers. Quite the reverse. We can learn from 2015, and the years that have followed, how to classify collective neighbourly behaviour. The sociologist Sabine Hark coined the term “gentle citizenship” for it. This is the only way that we can continue to live as a democratic society, as it is the only way that bolsters humanity. The comedian Sarah Bosetti put it like this: “the world be a better place if people were not allowed power disproportionate to their human decency. I don't know what it would look like, but I would love to see such a country.”

Appropriate news coverage regarding violence against women and feminicide, without discriminatory stereotypes and in tune with the advances of women's rights and gender equality, can contribute to changing mentalities and diminishing of it. 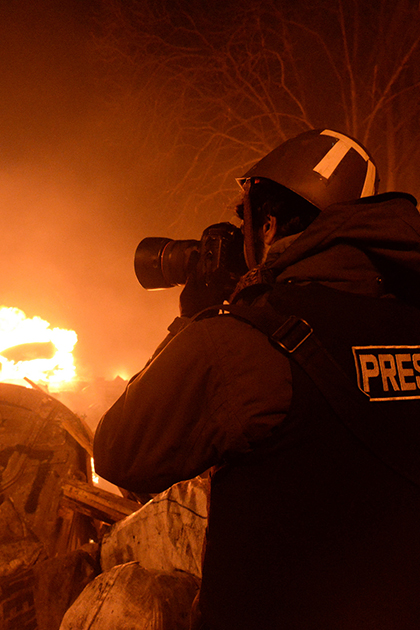